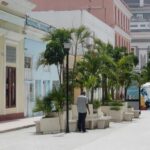 April 23, 2018 Nicaragua  Over the past weekend, protests against the changes to social security contributions and pension plans resulted in clashes between activists, as well as between police and protesters. The worst violence was reported in Managua, where police and military personnel were deployed to several locations, including the…  END_OF_DOCUMENT_TOKEN_TO_BE_REPLACED